Rockland County Executive Ed Day was born in 1951 to Ed and Jane Day, and started his life in humble beginnings, growing up in tenement housing in Brooklyn. The eldest of three children, Ed graduated from Brooklyn Technical High School in 1968. He continued his education with an Associate’s Degree in Business Administration and Marketing from Kingsborough Community College in 1971, further pursuing his education at Pace University while working full time as a sales professional at Handy & Harman, a precious metals refining firm. In 1979, and after eight years of private sector employment, he decided to forego his higher salary and join the New York City Police Department. In 1983, he moved to New City. 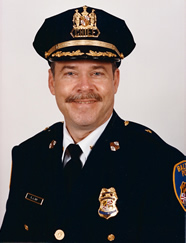 Ed Day as Chief of Detectives of the Baltimore Police Department

Ed’s career took him from Patrol Officer through promotion to Sergeant in 1985, when he oversaw one of the first Community Policing Units, Lieutenant in 1989, and Lieutenant-Commander of Detectives in 1999, holding several key positions before serving as Commanding Officer of two Detective Squads in the Bronx. Ed retired from the NYPD in 2000, having earned 40 citations for meritorious and conspicuous actions in the line of duty. He then joined Phipps Houses Services, a New York-based property management corporation with over 10,000 apartments, 300 commercial spaces, and 600 employees as their Director of Corporate Security, where he was responsible for companywide security management and a budget in excess of $3 million. In 2003 he became Chief of Detectives of the Baltimore Police Department, where he held executive command responsibility for all detective operations, personnel, and administrative matters within the entire 3,200 member police department. He oversaw a budget in excess of $7 million and implemented a series of reforms, resulting in a 50% increased success rate for violent crime investigations, and reducing overtime expenditures by over 10%. He then moved back to the private sector, and became the Senior Security Consultant for American Security Systems, Inc., a New York based security systems installation firm, a position he held until assuming the office of County Executive. 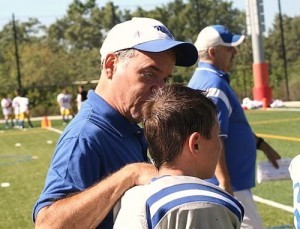 Ed Day as coach of the New City Rams

Ed has been dedicated to the community both in and out of politics. As a youth baseball, basketball, and football coach, Ed has helped develop the youth of our county since the early 1990’s. Seeing a need to better unite and represent his local community, he reconstituted and served as president of the Little Tor Neighborhood Association in 1997, continuing to serve as a board member today. He also helped in our schools, creating the PTA Child Personal Safety Course Pilot Project, a curriculum adopted and still in place in Clarkstown Schools to this day, being honored as a Lifetime Member of the PTA, and serving as co-president of the Clarkstown North Football Fourth Quarter Club. In 2003, his dedication to the community was recognized when he earned the Rockland County Distinguished Service Award. 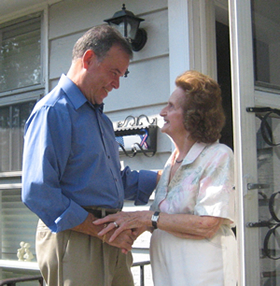 After having served as a volunteer on many Town committees and fighting for his community in an unofficial capacity, in 2005 Ed realized that he could better fix government from the inside, and decided to run for the County Legislature. With pundits calling it an “against all odds” effort, he shocked the political system with a victory over the incumbent by 54%-46% margin, despite running as a Republican in a 3-1 Democrat district in New City & Haverstraw. Ed’s tireless efforts fighting for public safety, fiscal responsibility, and a common sense approach to government led to his reelection over a former County legislator by nearly a 2-1 margin in 2007 and further reelection in 2011, a clear endorsement of his tireless efforts to actively represent his district and his fight for more responsible fiscal policy, having voted against every single one of the many irresponsible budgets proposed since 2008, while proposing what would prove to be prescient budgetary suggestions of his own. Running on the Republican and Preserve Rockland lines, he was elected Rockland’s third County Executive with 52% of the vote to his opponent’s 46% in 2013, in an election that saw historically high voter turnout.  Four years later, and after implementing a series of actions and reforms that not only pulled Rockland County back from the brink of bankruptcy but also fully eliminated a massive deficit while setting the county on a path of success that most called miraculous, Ed won re-election decisively and by nearly 10,000 votes in an election that had the highest voter turnout ever recorded for a local race.